I started my search in the living room. The first thing I found was a map of Cullingville, so I grabbed that and took it with me. Here's a picture of it: 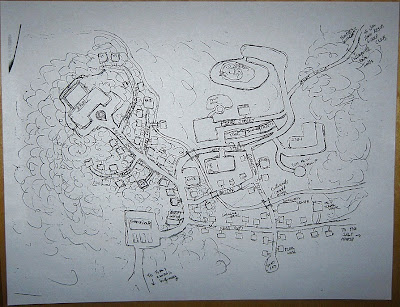 Other than the map, I didn't find anything of interest in the living room.

I took a brief glimpse in my parents' room but didn't see anything out of the ordinary. A cursory glance told me that all of their clothes were there, so I left it alone and went to other areas of the house. Clearly they hadn't gone on vacation.

I decided to check out my room. I hadn't been there in awhile. I started at the closet and worked my way over to the bookshelf. Interestingly, I found my diary. When I was a teenager, I wrote in it religiously. I opened it up and read for a little while, reminiscing in the memories, until I got near the end of it.

January 24
Mom told me today that I'm going to go live with my Aunt Karen in Sackville for a little while, probably until university. I got a bit upset. I mean, who could blame me? I'm supposed to graduate in the next couple of years, plus I was going to be inducted into the Five Petals next year! I tried to argue and say that all of my friends were here but Mom was having none of it. When I brought up the Five Petals, she acted really weird and looked away.

So it looks like I'm going to Sackville for awhile. I guess I should be happy. I'm not. She said I could finish this school year before I go, at least.

I flipped a few pages down. The next interesting thing was in July.

July 2
I'm moving to Sackville tomorrow. I visited Aunt Karen there last week and she seems happy to have me here. I think it's going to be ok after all.

I'm going to get a summer job scooping ice cream for Aunt Karen's boyfriend, Rick. He runs a convenience store and he said he's looking for help.

I haven't made any friends yet but it looks pretty out there and it's a little bit... cooler than Cullingville. I'll miss my friends but Aunt Karen said I could use her computer to e-mail them.

I vaguely remember that time of my life. I ended up enjoying high school in Sackville far more than I did in Cullingville! I left the diary behind and went downstairs. I remember that I started a brand new one when I moved to Sackville.

I got to thinking about the Five Petals. Both of my parents have been members since before I was born, and they had always had high hopes of me joining, as well. I don't know much about the group--it seems no one in the town really did--but they always did fund raisers for the school and for some charities. I don't know why I was so excited to join, though. I guess because it was a family tradition.

I went down to the basement and started snooping there. I found nothing tell-tale. I really don't know where my parents went. I did find a flashlight, however, and an old oil lantern, so I took them with me. The flashlight works fine and the batteries seem in tact, so I brought it with me.

Now, though, I'm truly stumped. There's still some food in the kitchen, so I'm going to grab a quick meal and go out into the town and see if I can find anyone there. I'll grab a bit of food to take with me, too... I doubt Mom and Dad will mind.
at 5:24 PM