I guess I'd better continue from where I left off...

As I was typing that last bit on my phone, I discovered something in the tree nearby.

A dead body, to be precise.

I let out a scream that surprised me even as I was doing it. I went to turn and run, but something caught my eye first. I grabbed it--it was a set of keys. I pocketed it, and then I ran. As I ran, my phone died. Great. And I was planning on calling the cops.

I'm so stupid. I should have done that to begin with. I thought it would be great if I could figure it out on my own, though, of course. Stupid...

I went to get my car to try and leave, because I just can't do this anymore. I figured I'd go to a payphone and call the cops from there. I took the can of gas I had and put it in the car, figuring it could get me a little ways down the road at least. I went to start the car, though, and it wouldn't even turn over.

When I lifted the hood to look, I noticed the engine had been removed. And someone left a dead squirrel in its stead.

Under the windshield wiper, I found a folded up piece of paper. I grabbed it and unfolded it to read:
"Don't worry little flower, you can figure this all out. Give it a little time, all hope is not lost.....yet."

And just what the hell is that supposed to mean?! They're mocking me! The handwriting looks somehow familiar, but it's no one I immediately can think of. I rolled my eyes and stuffed it in my pocket. Frustrated, I moved directly to the payphone booth at the corner of the gas station. I went to pick up the phone, but the cord came with it. Severed.

I took this brief opportunity to kick something.

...An hour later, I think it's time for me to move on and continue.

I already know who the body was. It must have been Edgar Piers. It fit his build perfectly and I'm sure he was the last person to enter the gardens. I'm worried it was one of the Five Petals who did it. My parents are Five Petals. Are they murderers?

And if he was dead, then what happened to everyone else in town?

My next destination is the Five Petals HQ. I need answers. 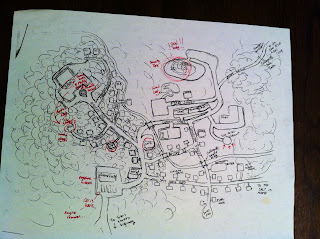