An in-depth search of Cullingville...?

I left the house and remembered that my aunt Dot's place was just down the road. I turned left from home and walked a block until I saw the turnoff for Cue Street, then walked up to the end of the street, where Aunt Dot's house sits on a little hill. Her house is the nicest in the neighborhood, in prime location, with a long, paved drive. Aunt Dot has a daughter named Vanessa, and she's my age. I don't want to say we never got along, but we certainly were never close, and we don't know each other well. She has a little sister, Amaryllis, and an older brother named Nicholas. I was sure I wouldn't be seeing them. Amaryllis had moved away long ago, but for whatever reason, Nicholas and Vanessa remained living with their parents.

I walked up the paved drive and noticed that their car was still there, too. I knocked on the door and rang the bell, then called up to the house and waited a moment. Nothing. I tried the knob, but unsurprisingly, the door was locked. I wondered if maybe Aunt Dot had hidden a spare key, much like my mother had, but a brief search of the front area showed nothing. I decided I was out of options and headed someplace else.

Walking to the bottom of Cue Street, a "school crossing - next 1 km" sign reminded me that the school was nearby, and I thought that might be a good place to look. I turned left and headed down the tree-lined road which led me right to the school itself.

The school was deserted, which was to be understood, as it was an evening. I marched right up to the entrance, though, and tried the door.

To my surprise, it opened easily. The door was unlocked.

I walked into the school and breathed in the heavy smell of old books and dust. It had that spooky, frozen-in-time look that a school tends to have when no one has been there for a few days. The unlocked door led me to believe that maybe someone had been in there recently, though. In fact, maybe someone was there right then. The thought made my skin crawl.

"Hello?" I called, then listened carefully. I heard nothing, so I continued on.

I turned the lights on and wandered down the corridor. The sun was beginning to set outside, giving all the rooms an eerie, orange glow. I wandered from classroom to classroom, seeing nothing of particular interest.

Except when I got to Aunt Dot's classroom.

My Aunt Dot is a teacher. The name "Mrs. Clement" was mounted above the door with a black plaque, indicating that it was her home room. I walked in to find little of note... at first. Then I took a look at the blackboard and noticed that the Five Petals symbol was doodled on there in chalk. 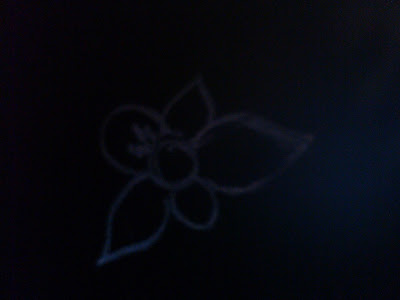 I snapped this photo with my phone and looked around the classroom. Tucked into the desk was a pair of hall passes and Aunt Dot's teacher ID card. I grabbed the card, thinking it might come in handy, and continued to explore the school.

Odd memories filled me as I looked. Once upon a time, this was my school. I distinctly remember taking a history class from Aunt Dot back in grade nine and thinking how strange it was that we learned nothing of our town's history. No one ever asked about it, so it was really only in the back of everyone's minds.

My wandering brought me to the teacher's lounge. The sign on the door indicated that no students should pass from that point forward, but I tried the door nevertheless. It didn't open, but the card slot beside the door's handle was tell-tale. I took Aunt Dot's ID and slid it into the slot, causing the little green light above the slot to illuminate, and the tumbler to click. The door was now unlocked. I opened up and went inside.

I wasn't phased by the empty room. I had even grown to expect it, by now. I searched the place thoroughly and found cubbies marked with each teacher's name. It seems odd the school board wouldn't give teachers their own lockers with an actual lock, but I guess they don't want them to be hiding anything. Thought police.

I felt a singular moment of triumph when I found Aunt Dot's spare house keys sitting on a hook in the cubby. What luck! Also sitting there was her daily planner. I grabbed it, too; maybe I would find something interesting in there. A folder filled with homework to be corrected also sat in the cubby, but I decided I would be best to leave that behind. I left the school and headed back to my aunt's house. Just as the sun touched the horizon, I got inside.

Right now I'm making myself comfortable. I think I'm going to do a thorough search of the place tomorrow morning, but for now, I'm going to leaf through my aunt's planner, and then it's time for bed. What a strange day it's been...
at 8:55 PM